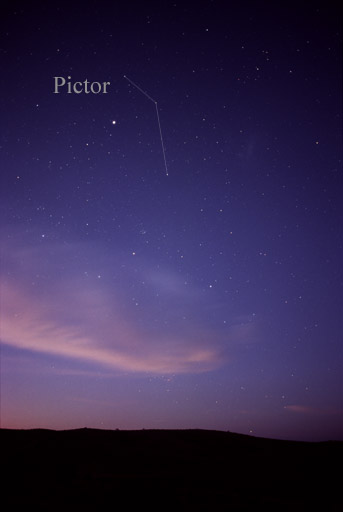 The Pictor constellation, in the Southern Hemisphere

Beta-Pictoris is a bright star seen in Southern sky. It is the second brightest star of the Pictor constellation, hence its designation Beta, the second letter of the Greek alphabet. Pictor is the abbreviation of Equuleus Pictoris, or the Painter's Easel,. Beta-Pictoris is somewhat bigger and brighter than the Sun. At a distance of 63.4 lightyears from the Sun Beta-Pictoris is considered nearby, and is easily visible to the naked eye (visible magnitude 3.86).

Beta-Pictoris is only 20 millions years of age, which is very young for a star. Around Beta-Pictoris a massive disk of debris was discovered and seen in the early 1980’s. It was the first time that a debris disk was observed around a star. The orientation of the Beta-Pictoris system is such that, seen from Earth, the disk is edge-on. The disk consists of gas and dust, leftovers from the formation of the star. The presence of such a disk around a nearby young star makes this system a popular object of study. One of the reasons is that planet formation is certainly still in progress in the disk. Analysing this system will lead to a better understanding of the process of planet formation. To date only about 20 other systems with similar disks are known.

In 2009, Anne-Marie Lagrange and collaborators, while analysing observations done at European Southern Observatory’s Very Large Telescope (VLT) in Chile in 2003, discovered a planet orbiting Beta-Pictoris. From more analysis and more observations it is now known to be a giant gas planet, about seven times as heavy as Jupiter, orbiting the star at a distance of about 9 AU (Astronomical Units; 1 AU being the distance between the Earth and the Sun). This corresponds to the distance of planet Saturn to the Sun. By comparison, Beta-Pictoris' debris disk extends to some 1500 AU. Until a formal name for the planet has been decided, it goes by the name of Beta-Pictoris b.

The analysis of more observations has allowed to refine the orbital parameters of the planet. The plane of the orbit is oriented in such a way that there is a good chance that the planet will pass in front of Beta-Pictoris, as seen from the Earth, somewhere between the summer of 2017 and the summer of 2018. This phenomenon is called a transit. During a transit, part of the light from the star wis blocked by the planet, so that the star’s total luminosity somewhat decreases. In the case of a transit of Beta-Pictoris b, this will last for several hours. Careful observation of these changes can help to better understand the star, the planet and its atmosphere, and the system as a whole. In fact, in 1981 a temporary dip in brightness was reported, which would be consistent with a previous transit in that year. 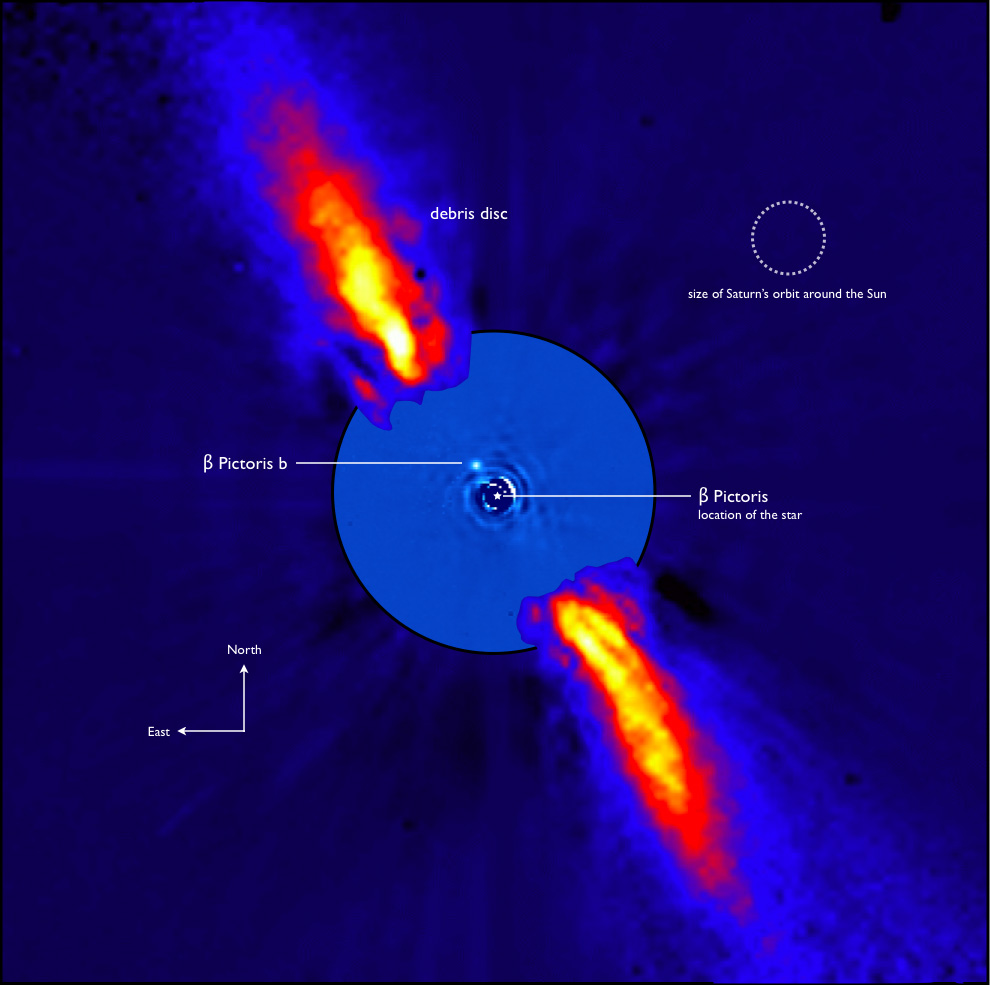 It is also possible that Beta-Pictoris b will just not transit in front of its star, but that its so-called Hill Sphere will. The Hill Sphere is the sphere of gravitational influence of an object. In the planet’s Hill Sphere there could be debris, dust and gas that can cause a small decrease in the star’s brightness as it passes in front of it. These changes can last for up to several months.

Other transit phenomena have been detected in the Beta-Pictoris system. Because the system is so young, there are many small asteroid and comet-like objects orbiting the star. These are several kilometres in size, composed of rock, dust and ices. They can be on elongated orbits and when approaching the star, ices will sublimate and form a coma and a tail that can be millions of kilometres in size. This is the exact same process as happens in the Solar System. By means of spectroscopy the temporary passage of such clouds of gas (coma and tails) has clearly been seen.

Please see the Beta-Pictoris Star System Info Sheet for a summary of some of this information.